The PlayBook is five years old, and is really showing its age. The built-in YouTube app stopped working years ago, and now the Android version I got you to install before has started giving a warning that it'll stop working soon if you don't upgrade. Fortunately, you can, although it's a little convoluted.

First, grab yourself the BlackBerry Graphical Aid while you still can. Next, get the YouTube version 2.5.16 apk and convert it to a bar over at GoodEReader. Put your PlayBook in developer mode, then attach it to your computer via USB cable, and use the graphical aid to install the bar. Open the app, let it run, then close it. Easy enough.

Here's where it gets a bit odd. You need to install version 5.0.21 on top of version 2.5.16. Convert the apk and install it just like you did with the older version. You'll notice that it uses a green Android icon instead of the standard YouTube icon. You'll also notice that when you try to run the app, it just shows a black screen. I have no idea how the installation process works, but the original app gets overwritten, so once you close the black screen, you can tap the icon for version 2.5.16, and it'll open up with the new version. You can't delete the green Android icon version, but you can move the icon somewhere out of the way so it won't bother you. That's all there is to it. Hopefully this version won't be deprecated any time soon. You won't be able to sign in, so you can't upload videos, but you can still do that through the browser, if you really must.

Note: Version 5.0.21 is the latest version I could find that worked well. 5.1.10 can be installed in the same fashion, but it shows an error when trying to list the current trending videos. Everything else seems to work just as well, though. Additionally, version 5.5.30 can be installed and run from its own icon, however the search function doesn't work, making the app considerably less useful.
Posted by Alex at 17:39 1 comment:

How to fix the dreaded Qt5Core.dll is missing error

This error popped up for me after I installed a recent version of the AMD Radeon drivers. It's annoying, but it seems pretty easy to fix. In my case, it involved navigating to C:\AMD\Non-WHQL-64Bit-Radeon-Software-Crimson-16.5.3-Win10-Win8.1-Win7-May21\Packages\Apps\CN\CNext\cnext64 then running ccc-next64.msi and repairing the installation.

The exact filepath may change depending on which version of the drivers you're using, and if you're on a 32-bit system you'll need to use ccc-next.msi in the cnext folder instead of cnext64. In any case, you should be able to figure it out. I believe in you.
Posted by Alex at 18:49 No comments:

If you're one of the 11 or so people who bought a PlayBook, then you know that Google has changed the way YouTube works, so the native app no longer functions. But, don't despair, you can load up the Android version. The most recent version I've been able to get to work is 2.5.16, which is available as a .bar right here.

There are a couple of ways to sideload it, but personally, I use the BlackBerry Graphical Aid, since I used to make apps for the PlayBook, and I already have it installed. You'll have to put your PlayBook into development mode (under security in the settings) in order to install the .bar, but other than that, the process is pretty self-explanatory. Enjoy!
Posted by Alex at 14:27 No comments:

My apps do not transmit any user information in any way. Certain information may be collected, but again, it's not transmitted, so it just stays on your device for use by the app.

Some older versions of apps may use the READ_PHONE_STATE permission for ad integration, but the ad networks no longer require that permission, so it doesn't do anything.

This policy may be updated from time to time.
Posted by Alex at 19:28 No comments:

My most popular app of late has been a clone of an Android app... which was itself a clone of something else if I'm not mistaken. I managed to bang it out in a day, since it's not overly complex, and it's been flying off the virtual shelves at a rate I haven't seen in a while. Maybe things are finally starting to turn around at BlackBerry and more people believe the platform will still be around in six months, so they're willing to pay money for apps. Or maybe the app itself is just super-fun. In any case, the success has encouraged me to stay in the app-making business for a little while longer. Look forward to seeing (slightly) more regular updates here in the future!
Posted by Alex at 09:21 No comments:

Drinki is no longer available

A user has brought to my attention the fact that the latest BB10 OS update breaks Drinki. Therefore, I have withdrawn it from BB World.

If you're looking to try one of my apps, I suggest How Puzzling. It's fun, and it's free!
Posted by Alex at 17:13 No comments: 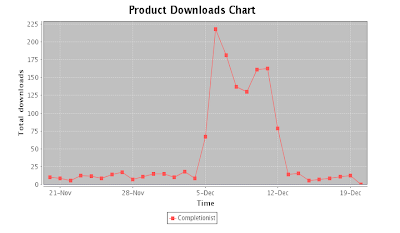 On the December 5-12, while it was being featured in the BfB section, Completionist received 1090 downloads, or a daily average of about 136. Outside of that period, it received 178 downloads, or a daily average of around 8. Clearly, being featured in the BfB section of BlackBerry World will give you a boost in downloads. Sales are quite another matter, however. Despite reasonably high ratings indicating that quite a few people actually enjoy the game, it's never really sold particularly well. In total, the free version with paid upgrades has grossed around $12 this year, which makes my share a whopping $8.40. There were two sales during the week Completionist was featured, which means I earned around $1.40. A conversion rate of under 0.2% is really bad. Unfortunately, I'm not sure there's any way to fix things, since people who own BB10 phones just plain don't seem to want to buy what I'm selling.
Posted by Alex at 10:52 No comments: